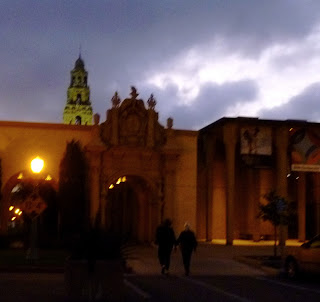 Thanks to our friend, Marge, we enjoyed a wonderfully quirky musical at The Old Globe. While some people were partaking of Shakespeare next door (The Tempest, I think) we were singing along to the joyful, shocking, campy music of the Rocky Horror Show. 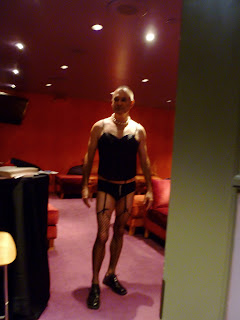 The movie became a cult classic and was known for the audience participation and costumes. The audience here in San Diego was a little more staid, except for this guy.


Before the show we had dinner at The Prado, which is a beautiful restaurant right here in Balboa Park. It's also walking distance to the Old Globe.  It was Restaurant Week in San Diego so they had special dinners with special prices.

Nancy, Marge and Jane had the salmon.

I had Thai Chicken with bright orange pasta. I thought it was covered in carrots when it first appeared.

Nancy had a beautiful sculpture topping her flan.

It was a wonderful evening!

Quasimodo's replacement- just for a laugh!

I saw this on Martin's blog- http://fridgesoup.blogspot.com. It was posted by friko and it made me laugh. (Shows what kind of a sense of humor I have!)

After Quasimodo's death, the bishop of the Cathedral of Notre Dame sent word through the streets of Paris that a new bell ringer was needed.

The bishop decided that he would conduct the interviews personally and went up into the belfry to begin the screening process.

After observing several applicants demonstrate their skills, he had decided to call it a day.

Just then, an armless man approached him and announced that he was there to apply for the bell ringer's job. The bishop was incredulous.

And he began striking the bells with his face, producing a beautiful melody on the carillon.

The bishop listened in astonishment; convinced he had finally found a replacement for Quasimodo.

But suddenly, as he rushed forward to strike the bell, the armless man tripped and plunged headlong out of the belfry window to his death in the street below.

The stunned bishop rushed down two hundred and ninety five church steps, when he reached the street, a crowd had gathered around the fallen figure, drawn by the beautiful music they had heard only moment before.

As they silently parted to let the bishop through, one of them asked,

'I don't know his name,' the bishop sadly replied,


The following day, despite the sadness that weighed heavily on his heart due to the unfortunate death of the armless campanologist, the bishop continued his interviews for the bell ringer of Notre Dame.

The first man to approach him said, 'Your Excellency, I am the brother of the poor armless wretch that fell to his death from this very belfry yesterday.

I pray that you honour his life by allowing me to replace him in this duty.'

The bishop agreed to give the man an audition, and, as the armless man's brother stooped to pick up a mallet to strike the first bell, he groaned, clutched at his chest, twirled around, and died on the spot.

Two monks, hearing the bishop's cries of grief at this second tragedy, rushed up the stairs to his side.

'What has happened ? Who is this man ?' the first monk asked breathlessly.

'I don't know his name,' sighed the distraught bishop, 'but..'


'HE'S A DEAD RINGER FOR HIS BROTHER.'
Posted by North County Film Club at 8:49 AM 2 comments:

The Grim Reaper takes an interest in politics

Paradox is the title of a Zentangle tangle. It's one of the more difficult ones. I've been trying to do it for the longest time and now I've finally got it. And now I can't stop.
The Diva Challenge this week was to use only Paradox. She calls it "Pair of Ducks" because that's what comes to her mind whenever she says it. So here's my "Pair of Ducks". And lots more Paradox.