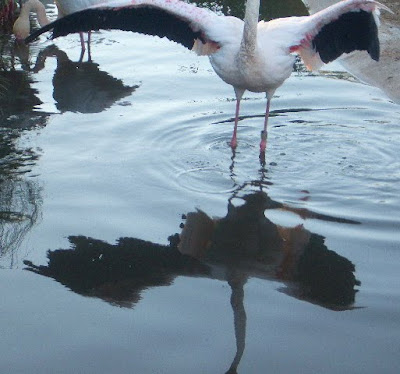 Click on the Shadow Shot link on the right to see more Shadow Shots.
Posted by North County Film Club at 4:58 PM 12 comments:

The Civilian Conservation Corps was a life saver for unemployed young men during the depression. Wouldn't it be wonderful if it could be resurrected now? 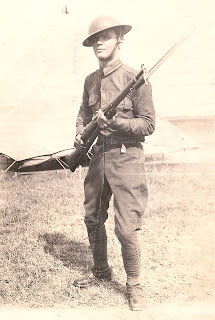 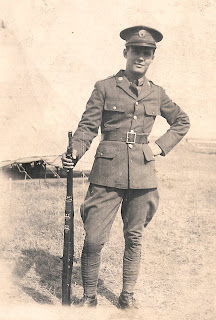 I'm not really sure that this is a photo from the CCC's  but I don't know what else it could have been. My father wasn't able to join the military because of a heart condition.  It seems odd that they would have issued the CCC boys rifles with bayonets.  I do know that he was in the CCC's, though.  He enjoyed the experience. 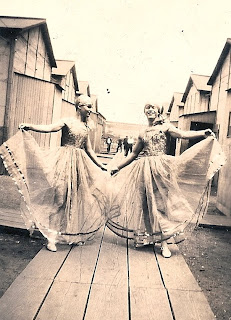 It looks like they must have put on "amateur theatricals" at the camp. Or else they were a bunch of "cross dressers".  This is my father on the left and his brother, Bob, on the right.
Don't they make beautiful women?

The Civilian Conservation Corps (CCC) was a public work relief program for unemployed men, providing vocational training through the performance of useful work related to conservation and development of natural resources in the United States[2] from 1933 to 1942. As part of the New Deal legislation proposed by U.S. President Franklin D. Roosevelt (FDR), the CCC was designed to aid relief of the unemployment resulting from the Great Depression while implementing a general natural resource conservation program on federal, state, county and municipal lands in every U.S. state, including the territories of Alaska, Hawaii, Puerto Rico, and the U.S. Virgin Islands.
The CCC became one of the more popular New Deal programs among the general public, providing economic relief, rehabilitation and training for a total of 3 million men. The CCC also provided a comprehensive work program that combined conservation, renewal, awareness and appreciation of the nation's natural resources. The CCC was never considered a permanent program and depended on emergency and temporary legislation for its existence. On June 30, 1942 Congress voted to eliminate funding for the CCC, formally ceasing active operation of the program.

In 1968 my boyfriend, John, was sent to Paris by Xerox to help set up the French Government computer system. One of his co-workers had a party. The drinks were served in paper cups. No self-respecting Frenchman would serve drinks in paper cups, therefore, decent ones were hard to find.  So we all stood around socializing while holding our seriously dripping drinks.

In spite of this problem, we all drank quite a lot. So much that on our way home in John's cute little Deux Chevaux we were stopped by the gendarmes. 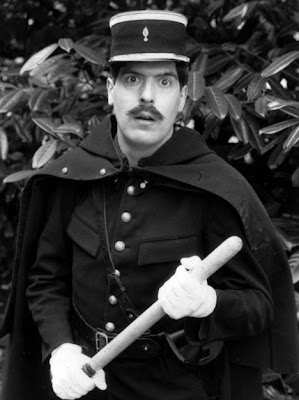 Two of them, who were actually dressed in the kind of uniform you'd see in the movies. Unless I'm remembering wrong they even had capes.  One of them put John in the police car and the other one got in John's car with me and drove us to John's apartment in Garches, just outside of Paris. (Picture me in the Deux Chevaux being driven by a gendarme like the one above). But, of course, I didn't appreciate the humor of the situation at the time.

When we got to the apartment, John was really panicked thinking that they would take him to jail and was trying to tell me what to do if he didn't come back. It all ended well, though. They told John to appear at police headquarters in the morning and he got off with a slap on the wrist and probably a huge fine. He didn't tell me the amount. 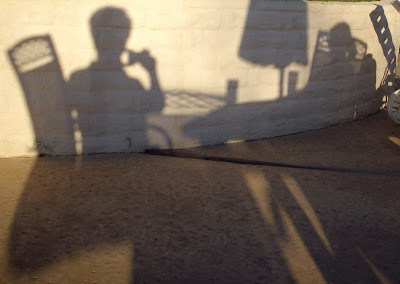 My sister and I having Bloody Mary's by the pool.
(My apologies to all of you in the bad-weather areas.)
Posted by North County Film Club at 9:04 AM 7 comments:

My mother's father left his family of five children during the depression. My mother was the oldest so she started working at a very young age.  Her first job was cleaning houses but she worked her way up to being the secretary for the State's Attorney of Lee County, Illinois.  She had gotten a college scholarship after high school but the family didn't have the money for transportation to the college.
I don't remember her telling us about working for the states attorney or this case but this copy of "Inside Detective" (1935) with her picture in it is with our family photos. 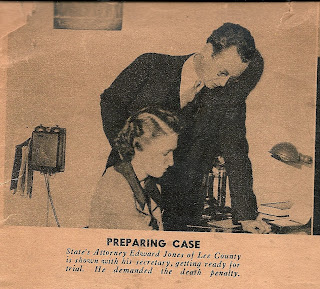 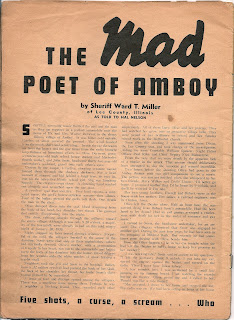 This was an interesting crime story about a poet who apparently killed the girl he was enamored with.
It kind of reminds me of the story I posted about last week. A poet was hit and killed by a school bus while drawing a flower in chalk in the street in front of his girlfriend's house. Well, I guess they're only a tiny bit alike- they both involve a poet and a girlfriend.

I'm not sure when this was taken. Pretty smile, pretty dress! 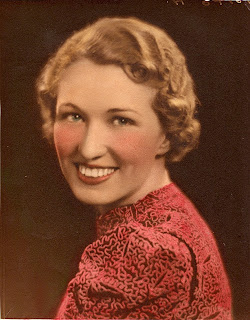 My mother moved to the big city of Chicago, worked as a secretary there, met and then married my father who was attending The University of Chicago.


The next time she was ever involved in the criminal justice system was about 20 years later when we lived in Pomona, California and she was the secretary to the warden at the California State Prison at Chino.  She had some interesting experiences there, but that will have to wait for another Sepia Saturday.
To see more Sepia Saturdays from all over the world or to join in click here
Posted by North County Film Club at 11:17 AM 6 comments: 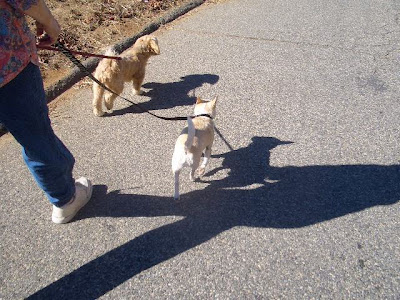 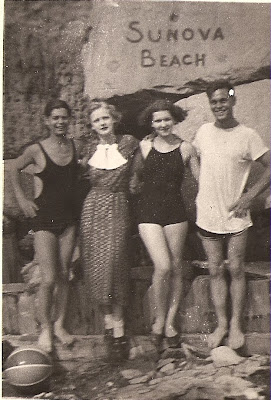 My Uncle Glenn, Aunt Phyllis, Unidentified Floozy, and Uncle Bob at Sunova Beach. (About 1937)
You met my handsome Uncle Bob a couple of weeks ago and My Uncle Glenn was mentioned a week before that.
Uncle Glenn was the 11 year old hero who steered the car to the side of the road after his father was killed by being hit in the face with a piece of a fire truck tire.
Uncle Bob was put into an orphanage with my father and their other brother, Don, so that their mother could go to work after she became a widow. Uncle Glenn was the oldest and went to live with an aunt and uncle.
I don't know why my Aunt Phyllis was completely clothed while the others are wearing fashionable bathing attire.
Don't you love the name of the beach?

Uncle Glenn was the oldest of the Finwall boys and the most long-lived. He almost made it to 100.
He died in 2006 at 99 years old.
We dedicated one of our painting books to my Uncle Glen. 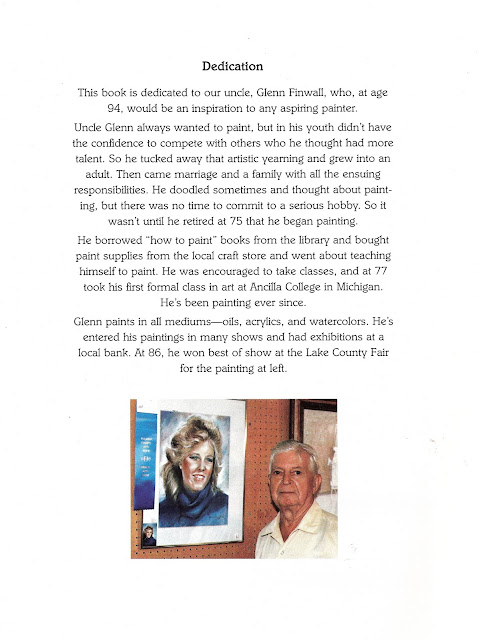 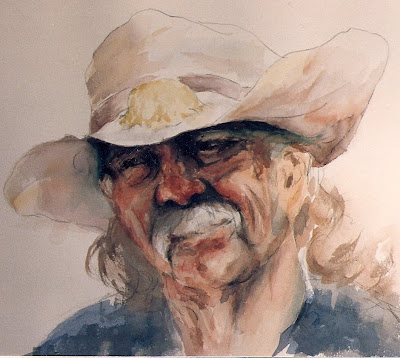 One of his paintings titled "The Old Miner" 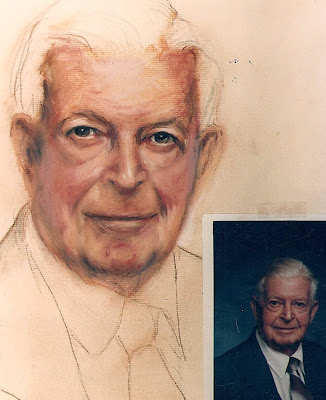 A self portrait.
Posted by North County Film Club at 8:43 PM 13 comments:

A little bit of the history of "flipping the bird"

A few weeks ago on Sepia Saturday I had a picture of my father's orphanage and a little boy in the back row was giving the finger with both hands. My friend, Helen of Guacamole Gulch, was curious about the history of "flipping the bird" and looked it up. It goes way back in history, at least 2500 years. Here's a small excerpt:

In 1886, Hall of Fame baseball pitcher Charles "Old Hoss" Radbourn slipped his little finger fastball into the Boston Beaneaters team picture. The split-second art of photography could turn the once-boring painted portrait into a spontaneous work of rebellion, humor and spunk. Americans everywhere quickly got into the act.

In the polyglot, immigrant mish-mash of early 20th century America, the finger was the one symbol every man, woman and dog could understand. With the invention of the automobile, it could be delivered from behind the safety of glass & steel, and at great speeds. All the finger needs to deliver its punch is a clear line of sight. Check out THIS horizon line, baby!

Throughout the 20th century, the finger has penetrated all levels of society. Roughhewn farmers did it, hippies did it, and even the Vice President of the United States got into the act. At a campaign stop for Senator Bob Dole in 1976, Nelson Rockefeller was heckled by protesters telling him what they thought of his Vietnam war policy by casting their middle finger votes. Never one to back down, Rocky just flipped it right back.

If you want to read more: www.ooze.com/finger/html/toc.html
Posted by North County Film Club at 9:31 AM 3 comments: 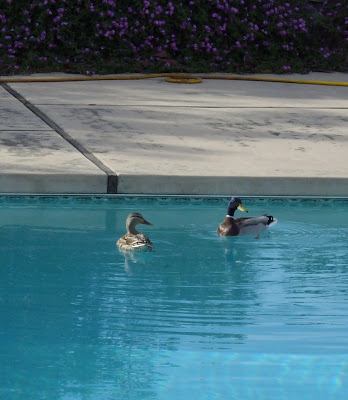 I don't know if this is the same couple ( they all look alike) but every year about this time they show up for a swim.  The Pool Guy (that's his company name) always wants me to shoo them away because he says they make a mess, but I'd really like them to stay.  They never do, though and I don't shoo them away.  At my previous house a couple moved in and had ducklings.  It was fun to watch them enjoy the pool.  A friend, who was watching my house while I was away, fashioned a ramp for them so that the ducklings could get out of the pool. He thought they were ready to leave but couldn't fly to get out on their own.
Posted by North County Film Club at 3:20 PM 1 comment:

AN ODD, ARTISTIC WAY TO DIE 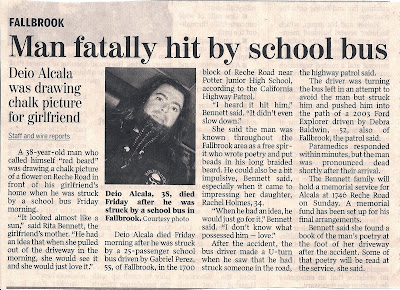 Such a tragic, touching, crazy story. He was at the end of his girlfriend's driveway, partly in the street, drawing a flower in chalk on the pavement.  He hoped that she would see it when she drove out of her driveway in the morning. Instead he was hit by a school bus (luckily with no children on board.) He was then hit by another car.

He was described as a free-spirit who called himself "Red Beard", wrote poetry and put beads in his long braided beard.  A book of his poetry was found at the foot of the driveway. Some of the poetry was read at a memorial service held for him at his girlfriend's house.
Posted by North County Film Club at 2:42 PM 1 comment: 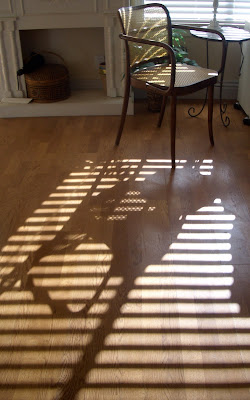 SEPIA SATURDAY The ghost of things to come 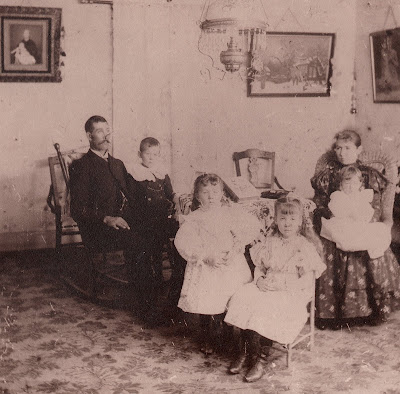 When I first saw this photo I was startled to see myself dressed in a vintage dress and holding a baby on my lap. It's actually my maternal great grandmother (Katherine White)  but she looks eerily like me. My grandmother is in the middle of the picture. On the wall in the background is a portrait of my great- great grandmother. 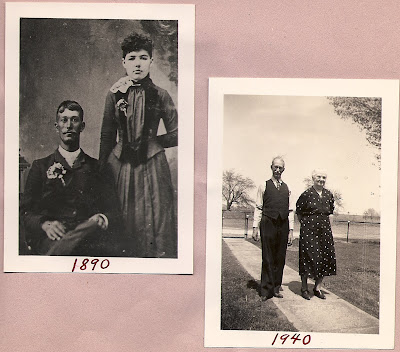 Jesse Edwin and Katherine White on their wedding day and their 50th anniversary.  She doesn't look so much like me in either of these pictures.
A poem written about their life was published in a booklet given out at the anniversary party. Here's an excerpt:
Once Edwin took her for a ride
but she almost did skin his hide:
for river waters she did feel
when Edwin's buggy broke a wheel.
But this young Edwin, he was brave
and to his sweet, one day, he gave,
as proudly as some foreign king,
the nicest little diamond ring.
Now Katherine dear was very shy,
she could not look him in the eye:
but with a low-toned voice she said:
"The sooner the better, if we wed".
Whoever wrote this was really stretching to make things rhyme. I'll spare you the rest and just say that they lived on a farm in Sublette, Illinois and had 12 children. 10 of them lived.
Jesse's ancestors, William and Susanna White came over on the Mayflower.  One of their sons, Peregrine, was born on the ship while it was anchored off of Cape Cod. His cradle still exists and is in the Pilgrim Hall Museum. 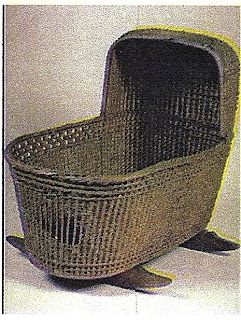 My ancestor was Peregrine's older brother, Resolved.
William died the first winter and Susanna then married Edward Winslow who later became a governor of Plymouth.
Posted by North County Film Club at 6:46 AM 20 comments: