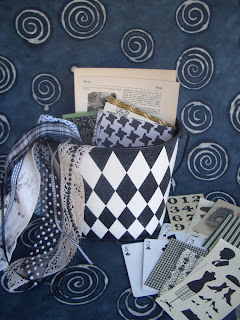 We've been selling things on a wonderful site that we've just discovered called Etsy. We're really having fun with it. Although I think we're going to be tempted to buy more than we sell. We thought it would be a great way to get rid of all the tons of stuff we've accumulated in over 30 years of business. It's not just stuff... it's great stuff...treasures. I think we're going to have trouble letting go of things, though. We keep saying "oh, no not that...I love that! We have loads of ephemera of every type, lots of neat things we've used as photo props , things we've made for books, things we've bought at garage sales, etc.,etc.
Our store is called Bits and Pieces Etc. I had to add the etc. because there already were a couple of stores called that. It hasn't been easy to figure it all out. In fact it's painful. But it's getting easier every day. See some of the other products at the right of this page. You can click on any of the pictures to go to our store. So far we're having fun putting bits and pieces of things in cute containers. I don't know what we'll do next. We both want to try some atcs and collages.
Posted by North County Film Club at 1:39 PM No comments:

Friends of the Library Luncheon 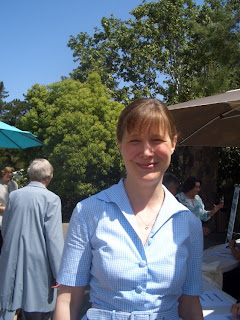 My favorite author, Anne Patchett. She asked to borrow my pen to sign an autograph for someone. She reminded me of Nancy and I ,who never had a pen when we went to tradeshows. It made it hard to write orders.

Anne was the speaker for the luncheon. She was wonderful! She spoke once before a few years ago and was very entertaining. It was just as if you were having a private conversation with her. Her step-mother lives in Fallbrook and is the outgoing president of the Friends of the Library. Nancy is on the board this year as the Publicity Director.

We sat at a table with members of another Fallbrook book club. They've had their club for 35 years. Very nice ladies. Vickie was the only other one there from our book club.

Anne's new book is "Run", which we read for our club. I loved it. She has a new book which I bought there ( from Carrie ) and had autographed. It's a speech she gave at her alma matre, Sarah Lawrence .
Posted by North County Film Club at 2:19 PM No comments: 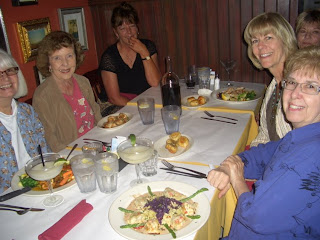 We had dinner with some of the members of our book club while we were in L.A. for the Book Festival. Pictured above are Nancy, Laurie's mother, Laurie, RoxAnn, her sister, and I. It was a wonderful restaurant named Cheese and Olive Cucina ( or C. & O Cucina) that RoxAnn's sister recommended. Then we went to their hotel for wine and conversation on their patio overlooking the ocean in Santa Monica. A wonderful wine with a wonderful name- Druid's Fluid.
Posted by North County Film Club at 2:04 PM No comments:

More photos from the Book Festival 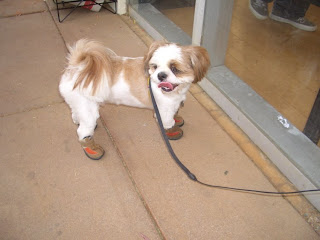 A dog well prepared for the very hot sidewalks. A lot of people bring their dogs to the book festival and very few of them know how to read. 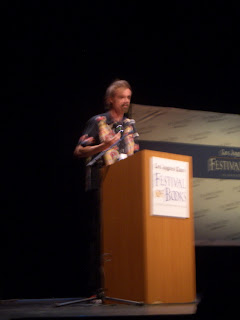 A nattily dressed T.C. Boyle reads one of his short stories...very dramatically!
Posted by North County Film Club at 1:53 PM No comments: 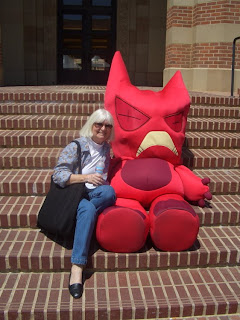 Nancy and I went to the book festival again this year. Our very favorite event of the year. Here's Nancy posing with one of the authors.

Howard Fineman ( The 13 American Arguments), Amy Goodman ( Standing Up To The Madness), Tom Hayden ( Writings for a Democratic Society), and the token conservative on this panel- Hugh Hewitt (Painting the Map Red)

Elizabeth Berg ( The Day I Ate Whatever I Wanted), Anne Taylor Fleming (As If Love Were Enough-also on the News Hour often with Jim Lehrer), Joanne Harris (Chocolat, The Girl With No Shadow, sequel to Chocolat), Elizabeth Strout ( Olive Kitteridge: A Novel in Stories)

Steve Lopez ( The Soloist; A Lost Dream, An Unlikely Friendship...) Our favorite!

T.C. Boyle read one of his short stories. (The Tortilla Curtain)

Nancy, Suzanne, and I visited our local knit shop," Gifts Of Love" Several people had knitted and crocheted squares and they put them together into afghans which they will donate to the fire victims. Suzanne was intrigued and will do a book on it. Steve, Nancy and I went the next week and Steve photographed them and Nancy and I styled the photos. Suzanne's company "Design Originals" will publish the book.
Suzanne was here for the CHA show in Anaheim and came to visit us afterward. We had a great time . We had dinner at Pala Mesa. The next day she came to my art class with me and made a collage of her husband. At least she started it and took it home to finish it. We always have a good time with Suzanne.
Posted by North County Film Club at 11:50 AM No comments: 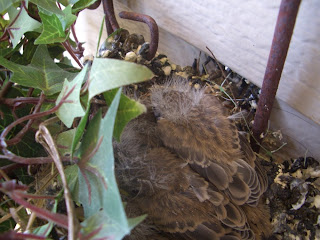 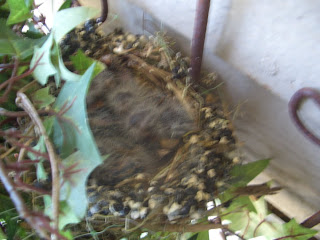 The baby birds at Tumble Creek have hatched.The first picture is when the birds were about 2-3 days old. The second picture is right after they hatched.

Steve and I photographed at the Tumble Creek house.He had a job to shoot some frames and I helped with the photo styling. My first job as a photo stylist that wasn't for Banar. Well, I guess I should count all the photo styling I did hundreds of years ago as an art director in L.A.
Steve actually paid me for it and I don't think I was much help but I did let him use my house. Big deal! I wanted Steve to photograph the baby birds but he said it would just look like a bunch of fuzz. I went back and shot it myself, and sure enough, it did. But it does show the progress of the babies.
New renters are moving in so I probably won't see them grow up. The tenants have promised to protect them, though.
Posted by North County Film Club at 6:29 PM No comments: 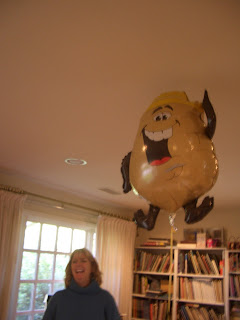 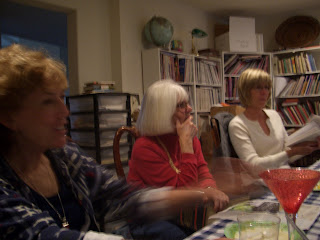 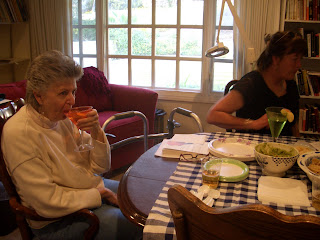 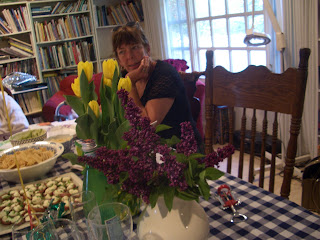 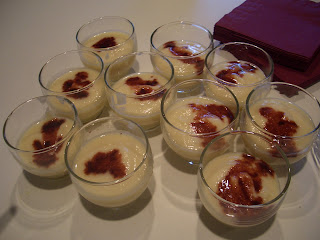 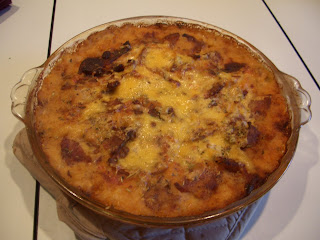 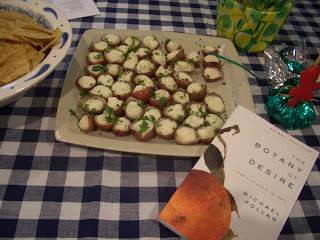 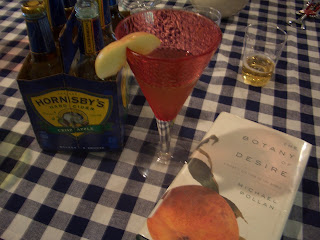 Book: The Botany Of Desire By Michael Pollan 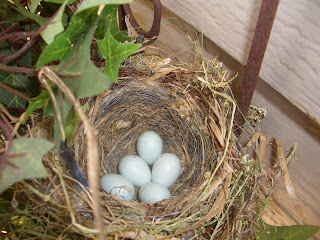 Went over to the Tumble Creek house and found this nest and teeny tiny eggs in a planter by the family room door. The parents anxiously waited nearby for us to leave.
Posted by North County Film Club at 12:20 PM 2 comments: 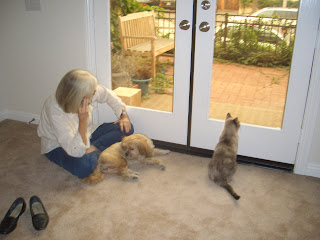 We sold the house at a loss. What a shame. We had high hopes when we bought it but then the baaad real estate market hit. Somebody got a real bargain but will probably have to wait quite awhile for the market to turn around.
We'll always remember that place as our refuge when we evacuated from the big fire. Nancy and I, 6 cats and a dog were relatively comfortable there during our week of evacuation. That seems such a funny word to use in this day and age and in this rich country. We certainly were'nt roughing it like some people were. Our only problems were no hot water and no furniture. It was empty while we had it up for sale.
Our wonderful real estate agent(and friend), Kurt Kinsey brought us folding chairs, blow-up bed, sheets and towels, and even a mini refrigerator. He and Antonio and Baby Jack even took us out to dinner. We also had dinner with fellow evacuees Judy and Lowell and our friend Nicki. The next day a nice visit with Steve, Laurie, and Laurie's parents (also evacuees). These are all people we don't see often enough so it was a treat.
All in all it was a pretty pleasant week if it hadn't been for the worry about our houses burning down. Everything turned out alright except later having to sell the place at such a biiiig loss! We'll survive. We always do. And usually come out better in the end.
Posted by North County Film Club at 6:54 PM No comments: