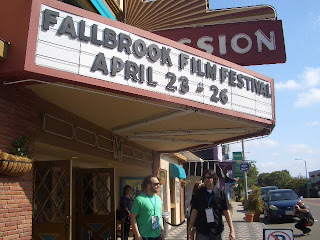 Nancy and I attended the Fallbrook Film Festival last weekend. It was surprisingly enjoyable and professional for such a small town. We didn't have time to see all the many films that were being screened but some of the few we saw were excellent.

Two of our favorites were " Help" directed by Val Lauren. A suspenseful story of a young man's desperate attempt to save his dying mother. Depressing but good.

Another that we really liked was "The Last Page", a writer attempting to overcome writer's block with really funny results. It was written directed by Kevin Acevedo. He was there and we were able to tell him how much we liked it. This film was one of several by Chapman University film students. They were all good.

Films were even entered from foreign countries. "La Camera Obscura" from Argentina. Nancy commented that it could have used some editing. In other words it was waaaay too long. "Chaturanga" from India, also too long but good. Both of these films were shown in our local coffee house Caffe Primo where we were able to watch them while drinking lattes and lounging on couches. Otherwise they would have really been unbearably long.

"Thinking Grande" was an interesting documentary about a man who emigrated here from Mexico and built a beautiful amusement park to recreate places that were nostalgic to him from his hometown. He did a great job but neglected to get any building permits. When they caught up with him he was so discouraged that he went back to Mexico. His son is now in charge of it but so far they haven't gotten the permits and it's sitting there empty. There's still hope and several interested people trying to help. Some of the craftsmanship was so georgeous- the bandstand for instance. It's going to be shown on PBS, so watch for it.

Most of the screenings were in the Mission Theater which was still being used for movies when I first moved here in the 80's. Now it's used for plays and special occasions. When our company was in the craft kit making business we had about 20 employees and we had an awards banquet at this theater. It was quite a memorable affair. Everyone dressed up in gowns and tuxedos. Our shipping clerk and his date arrived in a limousine. The catering was done from the candy counter- but was a full dinner. After the awards were given out we had a band and dancing on the stage. 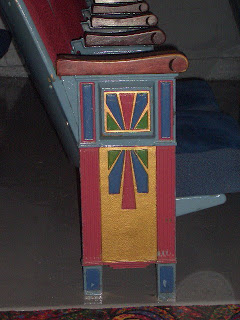 It still has some of it's original decor including these seats.
Posted by North County Film Club at 5:33 PM 1 comment: 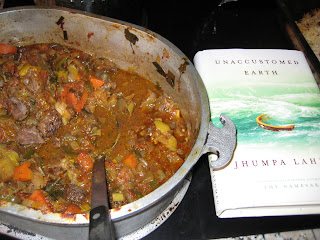 Laurie made a delicious stew.
We read Unaccustomed Earth by Jhumpa Lahiri. We previously had read The Namesake also by her. She usually writes about the experiences of Indians who have come to live in the U.S. We all liked both her books. I'm a real fan of hers.

We met at Kathie's house. She's still recovering from her recent knee replacement surgery and not quite ready to drive, yet. Luckily we have such a great bunch of ladies in our club that there's never any cleaning up to do after everyone leaves. Vickie, Laurie and Roxanne are especially good at this. 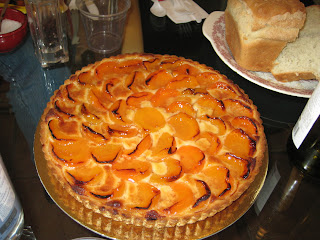 Beth brought this beautiful tart made by the new baker at The Lace Apron. 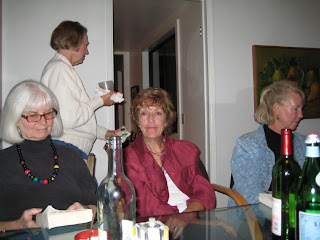 Nancy, Helen, and Barb add some final discussion about the book while Vickie
starts cleaning up. 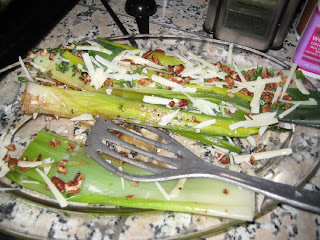 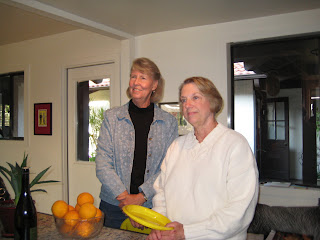 At the Mark Taper Forum - "Lydia" a play by Octavio Solis 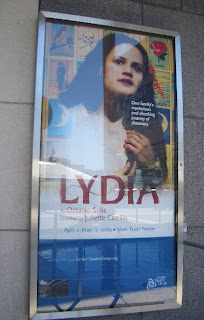 April 5- Wonderfully acted but very disturbing. About a Mexican family in El Paso in early 1970.
The daughter, Ceci, has been badly injured in an auto accident. The mother hires Lydia as a maid and mostly to take care of Ceci. There are two brothers, one a gangbanger and the other a sensitive budding poet. The father has pretty much opted out, sitting in his lounge chair with earphones on drinking beer. They all love Ceci and are all damaged in various ways by her accident. It was a very complex play with lots of levels. At the end the audience sat stunned for several minutes before giving the cast a standing ovation.
Posted by North County Film Club at 1:16 PM No comments:

Frost/Nixon at the Ahmanson Theater, L.A. & lunch at Phillipe"s 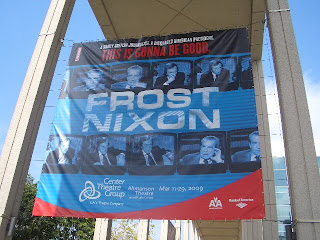 March 29- We saw the movie and loved it. Frank Langella should get an Academy award for his portrayalof Nixon. But the play was even better! Stacey Keach was supposed to play Nixon but was sick so Bob Ari played the part and was wonderful. I had never heard of him but now will watch for him in other roles. 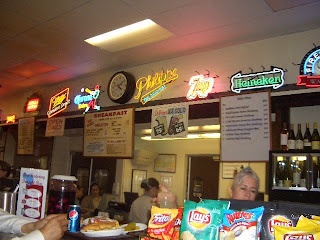 After the play we had lunch at an L.A. favorite, Phillipe's. It's famous for it's French Dips. Has been in downtown L.A. forever. Near Olvera Street and the Train Station. Also near Chinatown. 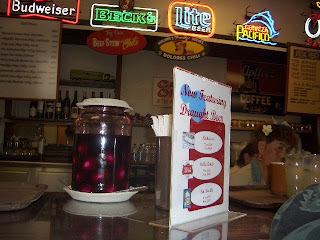 Another thing it's famous for is pickled eggs. You have to line up to order and the lines are usually quite long. The waitresses are always patient and polite and fast. They wear the old time waitress outfits with the hankie in the pocket and they make the sandwiches right there. They're absolutely delicious. So are the desserts especially the cheesecake. If you're in L.A. check it out. 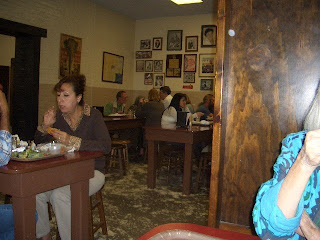 Note the sawdust on the floor and the community tables.
Posted by North County Film Club at 12:40 PM 1 comment: