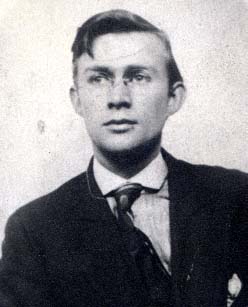 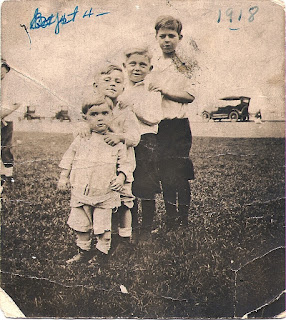 The Finwall boys, Glenn, Don, Bob, and Gil (my father).
The photo is dated Sept. 1918. Petrus was killed
the next month in an accident with a firetruck.
The car in the background might have been
the one they were in.

One of my earliest jobs was as a record cover designer.  So it was quite a coincidence that my grandfather had a similar career as a sheet music designer. He really passed down his "artistic gene". The oldest child in his and each of his descendant's families became an artist.

His oldest son, Glenn didn't realize his artistic abilities until he retired. I wrote a post about him.
He was a wonderful artist.
http://banardesigns.blogspot.com/2011/11/sepia-saturday-celebrating-100-posts-my.html


The oldest son of my Uncle Don had a printing company.
( I think he started out as a designer.)


Uncle Glenn's oldest child, Carol Ann was my inspiration. She made the most beautiful paper dolls.
She and I would sit and draw, color and cut for hours. Unfortunately she took her own life in her early twenties before she could have had an artistic career.
Now my niece, Megan is an artist.  She started out as a graphic designer and now is a film maker.

None of my grandfather's sheet music covers have survived. Some relatives think they were destroyed in a fire. I'm constantly on the look-out for covers from Chicago publishers in about 1918. Not many are signed by the artist so I've never found any by him.

No way! You made this up! Seriously, this is just amazing. I know real people design sheet music, but I've never "known" someone nor have I ever expected to know someone. It's also interesting to know that artistic gene is a STRONG gene to keep getting passed along so fruitfully.

Wow! What an amazing artistic legacy!

Such an artist! So creative and in your own family too! Great photos- Didn't anyone tell them, never mess with kitty-cats! I really enjoyed your post, thanks!

What a shame that you don't have any of his sheet music cover designs. I think that one for "By the Silvery Nile" almost looks like it could be a Tintin cover - well, Tintin with a bit of class, perhaps. Have you ever posted some of your record cover designs?

How sad that those lovely boys should lose their father so young. I do hope you find some of your grandfather’s music eventually, but what a wonderful talent to hand down.

Barbara, this is such a great post; I like the different themes that you combined to make it, and enjoyed your family photos and stories. That is sad about the untimely deaths of your Grandfather and your cousin. Maybe your Grandpa is checking your blog today and saying, "She did good, I did design those covers!"

Keep looking Barbara, I'm sure one of your grandfather's cover will turn up. Just tell us when it does.

There are so many good designs on sheet music covers. It's a shame that they didn't include the designers name.

Your grandfather was a talented man - both an artist and a house builder. Interesting how the artist gene has passed through your family. Like your choices of sheet music - my favorite is the Summer Showers.

Brett asked if I had ever posted any of my record cover designs. Here's a post about it. http://banardesigns.blogspot.com/2011/05/sepia-saturday-organ-magic.html
I'm not proud of this design and I must not be proud of any others, because this is the only one I have.
Barbara

Of course, I remember that record cover now, thanks Barbara.

You had me with the cat cover!!
Is Art a gene?
One that can be passed down?
It does require a certain sensibility. I think I'm full of it!!
Well, I'm full of...
something!!
;)~
HUGZ

I remember it too!!
Crayons and black gouache, or ink, which you scrape off. That's what I thought back then. That's how we did it.
Awh, what an era!!
:)~
HUGZ

What a fantastic connection with your grandfather! And I do hope you saved some of your cousin's handmade paper dolls.

What a very fascinating post Barbara - I am rooting for you to discover at least one of your grandfather's sheet music designs - you just never know!