Like most men of my father's generation, he didn't often express his feelings. I was surprised to find this "semi" love letter among my mother's keepsakes.  It was written in 1944.
Apparently my mother (and we three kids) were staying with relatives in her hometown of Dixon, Ill. while my father was in Watseka, Ill. where he worked.  He was looking for a house. These cities were quite far apart so they weren't seeing each other very often. He must have been very lonesome and he made reference to my mother being despondent. 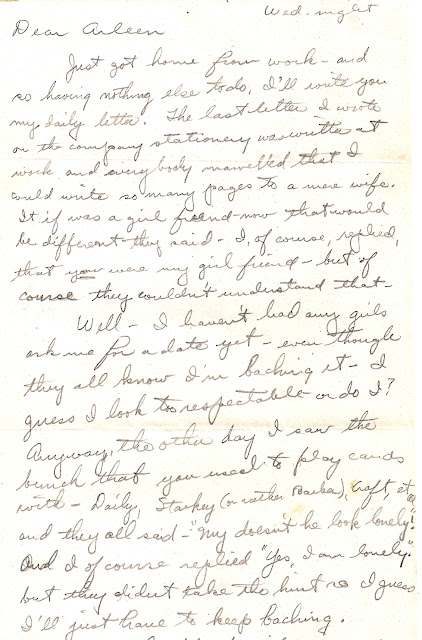 Since this is a little hard to read I'll tell you a little of what it says:

He had written his last letter at work and everyone marveled that he would write such a long letter to a "mere" wife and that if it was a girlfriend it would be different. He replied that she WAS his girlfriend.

He goes on to say that my mother's card playing friends thought he looked lonely and he said he was lonely but none of them took the hint so he thought he was going to keep "baching".

I told you it was a "semi" love letter.


It goes on for 6 pages but mostly about work and house hunting. He mentioned that he looked at a house for $4000 that he thought could be had for $3500. Those were the days!!!

For some reason he enclosed the phone bill and there was a call to Dixon for $1.45 which must have been a fortune in those days. So apparently they were also talking on the phone a lot.

He always ended his letters with a drawing for the kids. 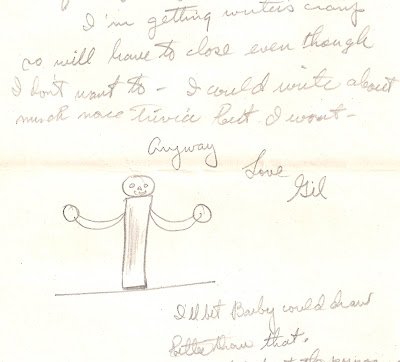 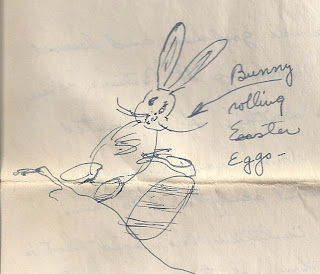 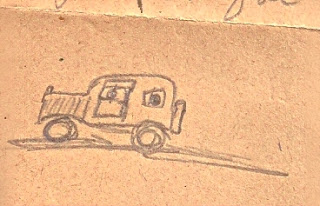 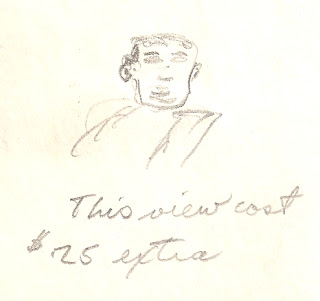 He wasn't much of an artist but I love these anyway. 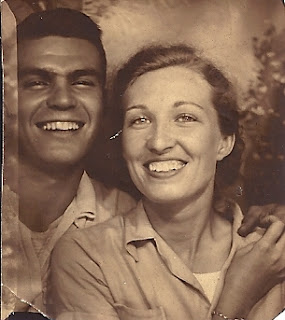 The happy couple before they were married.

How sweet. I love the sentiments and the little drawings. What a great piece of memorabilia. Doesn't it make you want to write someone a letter that might be found in a box somewhere in the future?

They were a great looking couple!

Lavender and Vanilla Friends of the Gardens said...

This is such a lovely post. He must have had a good humor looking at his drawings. I think they were a smashing good looking couple.

I love the idea of the little sketches for the kids. They certainly look a handsome couple.

I sure hope this period in their life was short- as they seem to be a wonderful couple who should never have had to be apart! What a great find! I love the drawings. He was so sweet. ;-) Beautiful couple too who look very warm. Lucky you!
CeCe

It is so good to have found your blog and read more about you and your life. Love your blog. It is a lot of fun to read your posts and I Sepia Saturday is a favorite. The letter written by your dad is so sweet. They were a lovely couple.

Oh my gosh! The letter was touching; the drawings, charming; but the photograph at the end: it sparkles, it glows, it's fabulous!

loving this!!
his writing is quite readable, possibly because mine is SO much worse!!
:D~
and his drawings are most endearing. nice to see that love exists, in many forms.
as much as i love my computer with everything that comes with, the correspondence that people used to have is something i miss. it was tangible!! even if you print out your emails, it's just not the same, not so personal anymore...

Oh why don't more people keep letters like this. And eventually they should be shared with the world - they tell us so much about everyday life.

A DAILY letter - how very sweet. I love the doodles too, especially the bunny rolling an egg. This is such a wonderful post. When I got to the picture of them together (in a photo booth?), I was totally won over.

Great post! I love reading old letters. Did I tell you I found a box of letters from my dad to my mom? It was like a part of their lives I never knew about and it was fascinating. I love your dad's doodles the best. I wish I had known him.