IN PRAISE OF PEACOCKS 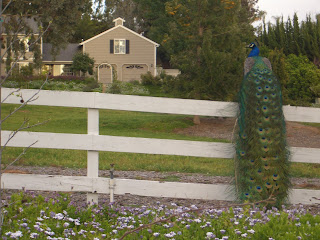 I really miss the peacocks at my old house. I've moved from this house and have leased it to a very nice family. I hope they are enjoying the peacocks as much as I did. I must admit, though,
that they are very noisy during mating season.
The story in the neighborhood is that the woman who owned the peacocks died and her husband, (who must not have appreciated their mating calls) let them loose. The mating calls must work because there are a lot of them now.
I didn't know that they could fly but one of them lived in a eucalyptus tree in my backyard and several times they walked around on my roof. You can imagine how that sounds from inside the house. 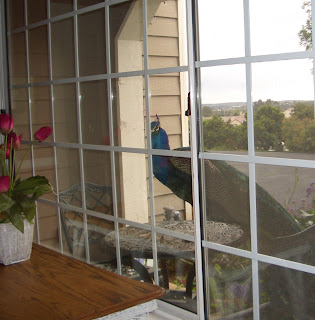 Here's one looking in my window. 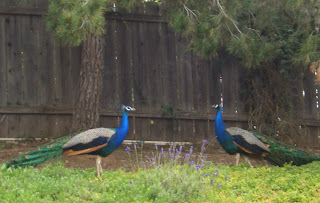 Two beautiful males. They often had fights during mating season but they didn't seem to be too serious. I think one of them just went off to another house. And the one who lived at my house went back up to his tree. 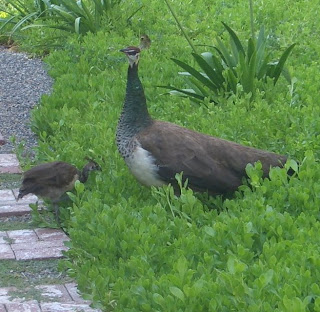 Here's the result of the mating calls.
Posted by North County Film Club at 5:58 PM

I saw some peacocks while visiting my sister, when she resided in Hollister, CA. Although it has been a while, I remember how beautiful and exotic they are. Really enjoyed these photos.

Hi Theresa,
I left a comment on your blog about coming to see these peacocks on my blog and then noticed that you'd already seen them. Not very observant of me!
Where is Hollister?
I've been enjoying your blog.