I started out with two kittens who had been abandoned at a restaurant near our office. There had been five but I found homes for the other three. The first one is Zoe peering out from her cat tree. The next is Chloe, Zoe's sister. They used to be best friends but now they can't stand each other. Well, actually, they tolerate each other. They're about 12 yrs old now. 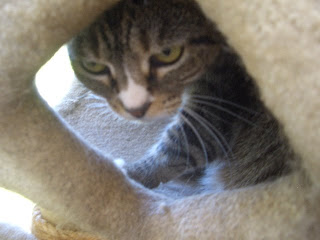 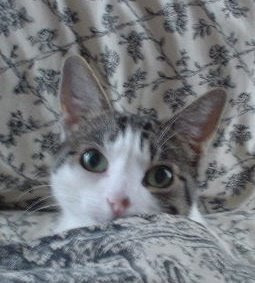 Then Abbie, a neighbors cat, had 5 kittens at my house. They never came to pick them up and then moved away. I found homes for all of the kittens but one . So now I had 4 cats. Abbie and her kitten Sassie. Of course Chloe and Zoe weren't happy so I took Abbie and Sassie to the office. Everybody needs office cats. 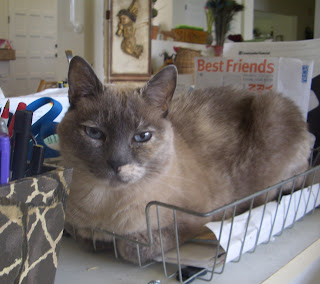 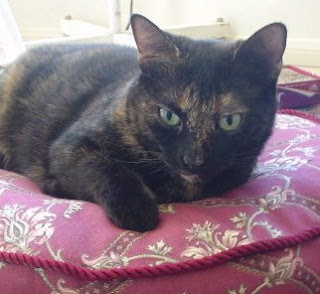 A little while later a black cat came walking by my house trailed by 5 little kittens. She tucked them away behind my house. I had a hard time capturing them all. The hardest to capture was the only boy, who managed to find his way into the roof area of my garage. He's retained the attributes of a ferral cat and has never been quite tamed. He sometimes lets me pet and brush him but is a real scaredy cat. I found more homes for all these kittens but the boy was returned.
They must have known how difficult he was going to be. So now I had the mother cat and her son. My friend, Jeri named them Mollie and Linus but I still call them Mama Kitty and Baby Kitty. With these last two and Chloe, Zoe, Abbie, and Sassie there are now 6. 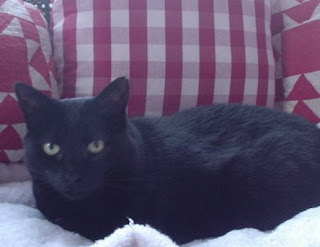 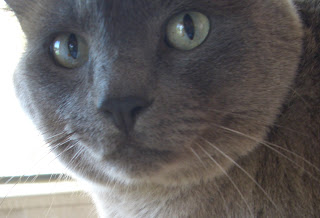 I now have a house with room enough for all of them and to separate the ones who don't like each other. Chloe and Zoe have a room of their own with a screened in patio. Abbie and Sassie have the run of the house and the office. Mama Kitty usually joins them while keeping her distance. Baby Kitty has his own screened in patio. He's often joined by his mother and Abbie and Sassie.
They all have to be indoor cats because this is coyote country and several live in our avocado grove. They were here first so we tolerate them, but we're very careful with our pets.
Posted by North County Film Club at 3:55 PM

Very cute indeed - very adorable! You are lucky to get them as your companion.

While doing the morning cat-duties I don't always feel so lucky. But at night when I need a respite from the day's pressures they work wonders.
Thanks for your comment. I'm on my way over to your site.